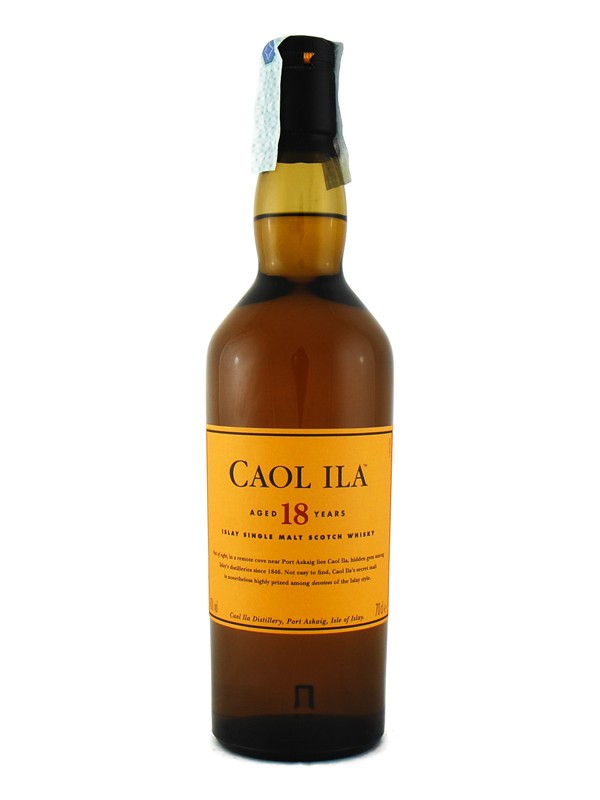 Since we opened this blog, six years ago (almost seven!), we have constantly been counting several Caol Ila samples in our cabinet. Only two to go, and we tasted them together. We start from a great classic by Islay distillery, the 18 yo we took the chance to taste some years ago, then we’ll switch to single cask by Valinch & Mallet, obviously already sold out. Far-off worlds, as in Franco Battiato’s album, becoming neighbors… All you need is fantasy (and thirst!)!

On the nose it’s a deep-dyed Caol Ila exactly as we expected, solid and compact. Gentle and smoky peat, then a balsamic side, with pine needles and menthol. A bold citrusy soul, with fresh oranges and orange marmalade. There’s also a soft portion of vanilla. On the palate is consistent, with a nice creaminess, charming and drinkable. We would say it’s invigorating, if this had a sense… The sweetness is balanced by Islay asperities, with increasing seaworthiness and smoke. Licorice. Exceptional in its banality. 87/100. Gorgeous, indeed. Probably after the fifth glass you could even get bored…

The peatiness smells almost like the 18 yo, intense but not too aggressive. And not sea-oriented either, except for a note of dried fish. A curious note of saffron risotto stands out, and even a touch of balsamic vinegar. The “sweet” side is a bit darker than in the other one, definetely more burnt. On the palate this difference is confirmed: it’s very bold, with strong notes of leather, licorice and honey. The sherry influence is not giving red fruits notes, but rather a vibrant spiciness. Barbecue and grilled bacon. 86/100. Nice, quite ragged, extreme perhaps. Despite its unquestionable quality, Serge defines it “inaccurate”, and we agree. It proceeds jerking, without being harmonious. On the other hand, it embodies perfectly the single cask philosophy: a tailor-made whisky, showing an unique personality. Love or hate.