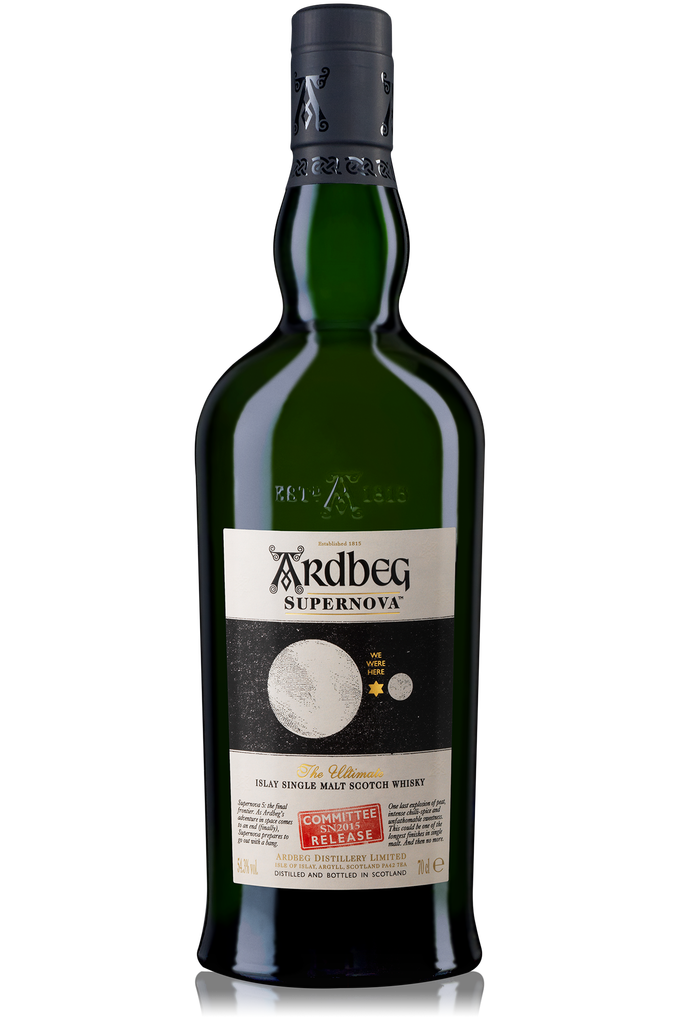 Ardbeg’s “Supernova” series alludes to the most peaty Ardbeg ever produced by the distillery, and is generally considered by malignant enthusiasts to be one of the last good cartridges fired from Moet Hennessy. 100 ppm versus the normal 50, today we taste the 2015 version (SN2015): the last act, hopefully, of the race between Ardbeg and Octomore to who has more peat. For the record, Octomore won.

N: looks like a purebred Ardbeg, with all its little things in the
right place… It has a very medicinal profile (gauze) and decidedly briny. The peaty explosion actually makes victims (notes of embers, of burnt, of extinguished bonfire), even if probably more than that the human nose is not able to follow the extravagant conclusions of the mind of certain distillery managers. For the rest, there are citrus notes rarely so intense and intriguing, summarized in cedar and lime. Finally, bourbon does its duty with strong vanilla, icing sugar, marzipan.

P: the impact is devastating, in intensity and compactness. There is a wall of really pronounced sweetness, and a disarming simplicity: white sugar, vanilla. The real added value lies in the simultaneous joint attack of a serious, acrid and smoky peat and an almost antibiotic medicinal side, which plunges the mouth with its bitter notes, and of an oceanic marinity. Another mixture of bitter citrus, lime, cedar, bergamot. And the lemon, where did we put it? We squeezed it on the antibiotic.

F: here the burnt wood takes the burden of the first voice, in an infinite metamorphosis of the elements between salty, sweet and acid.

Really excellent, a blaze of intensity that pushes hard on all the hallmarks of the modern Ardbeg: sure, the sweetness is all oak-driven, but it integrates with great balance to the storms of the distillate. It
seems obvious that you have to like peat, here really shot to bits: and unlike other expressions, as far as ppm is concerned, it seems to penetrate into really super territories, where smoking, burning and
medicinal attack the senses. All very nice, though, and we’d like Ardbeg to be always (at least) so: 90/100.