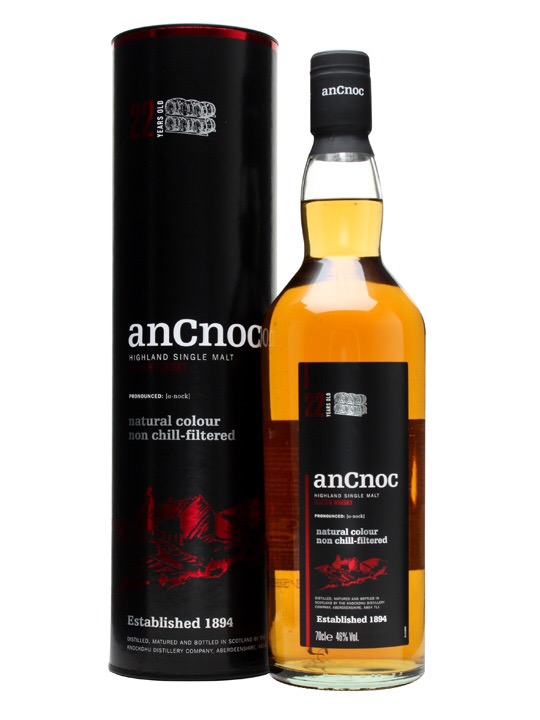 Born from the marriage between ex bourbon and ex sherry casks, this AnCnoc 22 years old has been launched in 2013. AnCnoc is produced at Knockdhu distillery, but owners have decided to chance its name since 90s to avoid confusion with Knockando, also taking the chance for a rebranding. Despite being in Speyside (it is the easternmost distillery in the region, for fans of the inevitable primates that each distillery boasts), Knockdhu loves to consider itself a Highland distillery, and in fact it declares itself on the label as Highland Malt – something consistent with the style of the distillery, generally. No more talk, let’s get into it.

N: very fresh and rich, but with sobriety. Notes of buttery honey and vanilla cookies mingle with truly persuasive floral accents. Peel of red apples, fresh plums and a bit of candied orange make it fruity and, again, not heavy at all. After a few minutes there is a sense of warm wood and dried fruit (mainly hazelnuts) that gives depth. This nose is easy but not one-dimensional, on the contrary it loves to swing between a mineral side and something much less impalpable, like a nice Christmas panettone. A note of milk chocolate.

P: at first this isn’t a powerful monster, and perhaps it’s quite watery. However, the drinker, refined or ignorant he might be, is awarded with creamy vanilla notes and a nice basket of red and yellow fruit like apples, plums and raisins. Lots of orange and chocolate. Also a nice package of toasted dried fruit, strong but not overwhelming. We were about to forget spices, but there are clear suggestions of cloves and pepper.

F: Dried fruit uber alles together with toffee, cooking spices and a certain mineral sensation that we would define as ‘ok’.

This AnCnonc 22 yo is really good and persuasive, but made complex by spicy notes that – we imagine – not everyone will like. The general sensation both on the nose and on the palate is very enjoyable, fresh but quite complex, becoming darker over time. Too bad for a little too shy palate, that however allows this AnCnoc to keep that elegant soul that in the end makes us say 87/100, the same rating we gave to the 18 year old. If we had to choose, we wouldn’t know. Note: it should cost around 110 euros, which seems to be a fair price for a 22 years old.