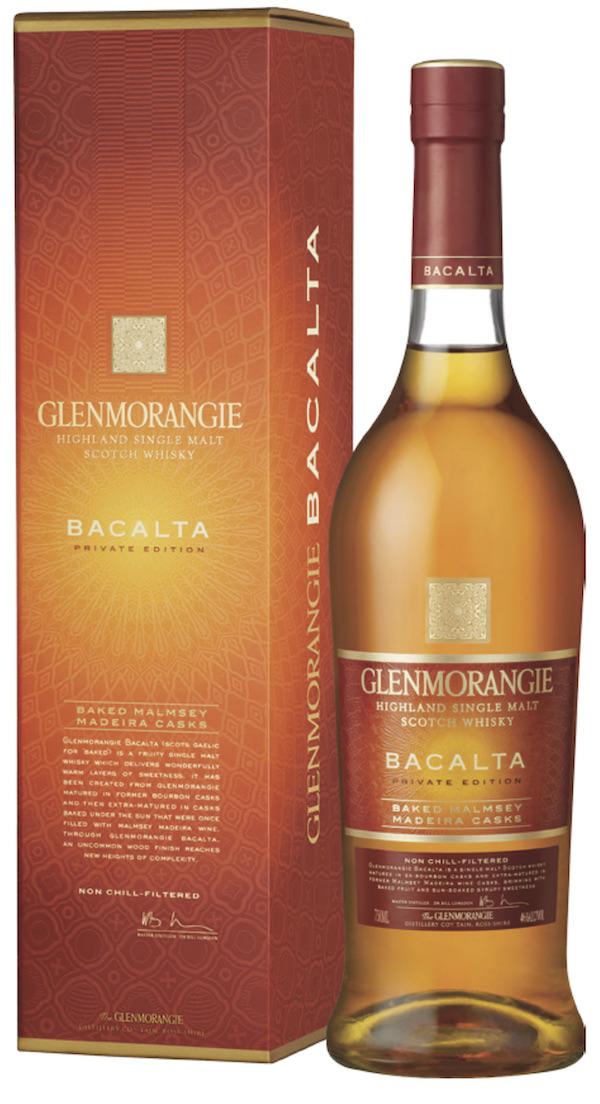 Let’s keep it short: Glenmorangie is a fantastic distillery from the Highlands, and it’s in LVMH (Louis Vuitton Moet Hennessy) portfolio of brands; the distillery manager (ehm, pardon: the Head Manager & Whisky Creator, hummm, yes, ok) is Mr Bill Lumsden, a crazy visionnaire who’s famous for his passion for experimentations, specially concerning wood types. The Private Edition range, self-proclaimed as “always intriguiing and winner of many awards”, has a new release this year: it’s Bacalta, baby!, it doesn’t have an age statement and it’s finished in Malmsey Madeira casks, dried under the sun and not artificially. If you want to read all the fluffy story cooked by the LVMH marketing office, here it is: but be prepared to a rethoric which is, well, a bit heavy, let’s say.

N: inviting and expressive, with no alcohol at all. The key word is “sugary” here, and if we translate it into ‘fragrancese’ (wtf guys, come on!) we think of ripe apricots and in compote, fruit pastry, orange jam, shortcrust… Dried figs too. There’s a complex spicy side, between ginger and white pepper. Something toasted. Under this carpet, if you pay enough attention you could also recognize a young and malty spirit, that from time to time seems to be eager to escape from the tyranny of wood and the complete interaction with it.

P: as on the nose, it shows itself as a very easy drinking dram, replying all the creamy and sweet notes: pastry, shortcrust, apricots, custard with raisins and citrus notes… Yes, it’s a slightly acid sweetness, if you know what we mean. This sugary exuberance is only a bit scarred by an alcoholic note a bit too pungent – itself balanced by a massive and woody note of dried fruits, that…

Glenmorangie is such a solid distillery that even when marketing a NAS finished in weird wood, can do it with style and elegance. We could actually say that this expedient was invented by Glenmorangie, thanks to Bill Lumsden’s imaginative deliriums and Louis Vuitton’s will of power. In this case too the experiment was successful, even if it didn’t reach the “unusual heights of complexity” promised by Glenmo website. 84/100 for a well made dram, that only because of the snarky humor of fatality doesn’t manage to fully reach our taste. So “bravo, but not bravissimo!” for us.