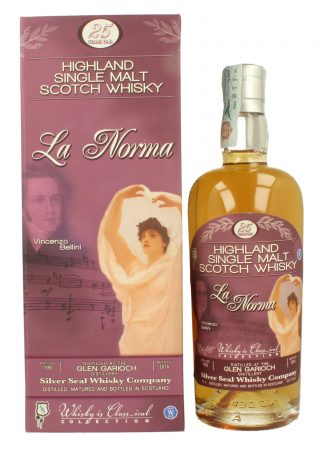 The volcanic Max Righi, owner of Silver Seal indie bottler, dedicated his 2016 bottlings to classical opera, as a tribute to two different excellences, both rich in history. For this reason the serie is called “Whisky is class…ical”, and as usual it’s characterized by very important aging, as for this Clynelish 22 yo. Today’s single cask, consecrated to Norma by Vincenzo Bellini, has a quarter of a century and was purchased by Glen Garioch, a little-known distillery, although founded in 1797 and very sought after by whisky geeks. Just a little trivia: the distillery, since 1973 under the ownership of Bowmore, continued to use its own malting floor until 1994, the year Suntory took over and put an end to this romantic anachronism. Now, if math isn’t an opinion, barley malted for this barrel in 1990 should come from those floor that no longer exists today. And we are frankly very curious.

N: very open nose from the very beginning. Yellow fruits have a truly majestic tone: it recalls sweet and ripe fruits, including apricot (jam and dehydrated), apple and pear puree, stewed fruit (pear, plum and raisin). Then, the pastry desserts play its card: panforte, certainly; some dried fruit desserts, and a nice brioche still filled with jam. There is also a mineral note – and also a more biting note (moist tobacco) that makes this nose complex and captivating. A little tamarind?

P: what a beautiful intensity! A very strong but mottled sweetness is confirmed. Fat notes of fudge and toffee are added to cooked yellow fruits (almost caramelized); then there is a note of pipe tobacco again, together with growing mineral hints (just a little bit of gunpowder), that seem to allude to a peat influence.

F: a slight reminiscence of smoke still leads us to the dichotomy between heavy, fruity and buttery sweetness and something mineral.

This is a good whisky indeed, with a really pleasant and a paradoxical bittersweet style, wich is classic of Glen Garioch. We like it very much, but if it had been even more ‘dirty’ we might have gone beyond the 88/100 that we now assign. In the end we recommend going to Formigine (Modena) on January 28th, to taste this single cask and many other gems. Max will open his new Whiskyantique shop, hosting a lot of guided tastings for the occasion. The shop is going to be a sanctuary of the whisky in which all fans should ‘pray’ at least once in their lifetime.