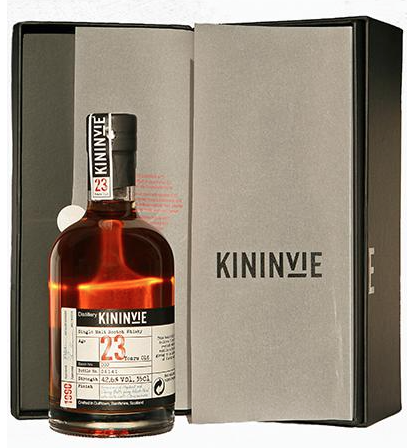 – Good Lord, what’s this Kininvie? I never heard of this distillery!
– Well, dear imaginary friend, we’re here to answer your questions…
– Oh, our “Know-it-all” guys… So, what the hell is this whisky?
– Mm, this is disbelief. But we’ve got the answer: Kininvie used to be a ghost distillery owned by the William Grant group: the small and not so cute distillery, located in the Balvenie’s courtyard, produced grain and malt whiskies for the house blended; on the contrary, now it’s used to distil almost exclusively single malt for Monkey Shoulder and for premium mysterious bottlings as we’re going to sip today, dear imaginary friend.
– So Kininvie is the new Hazelwood!
– Exactly, but a little more expensive…
– Everything’s clear now. Let’s drink together!

N: from the very first sniff, it’s suddenly clear that’s a whisky smelling exactly like a malt from Dufftown, with its charming sinuosity: there are delicious hints of apricot croissant and buttery toffee (fudge), than sexy notes of canned peaches and golden apples; milk bread with sultanas. Sherry casks have been clearly used, because they provide a wonderful sensation of toasted oak, melted sugar (tarte-tatin). Everything is very rich, indeed. A light blood orange peel balances everything.

P: buttery cereal with sugary cooked fruits. It’s up to you to find what kind of fruit, according to your experience: a fragrant apricot croissant, a gorgeous apple pie or maybe tarte-tatin. A little bit of toasted oak and dried orange peel, again… Something nutty, too. Honey.

F: quite long and persistent, it follows the line of nose and palate, between butter and orange peel, malt and nuts.

As you certainly already know, it’s a bottle highly sought after bottle by the collectors, which still remember crazy prices of the first Hazelwoods. It’s 35 cl only, but it was released at 130 euro. Ignoring the price, we must say it’s a good whisky, but not a masterpiece: the quality is high and – despite the low ABV – the intensity of flavours is high-level. But we want everything, we want to dream! So no more than 85/100.