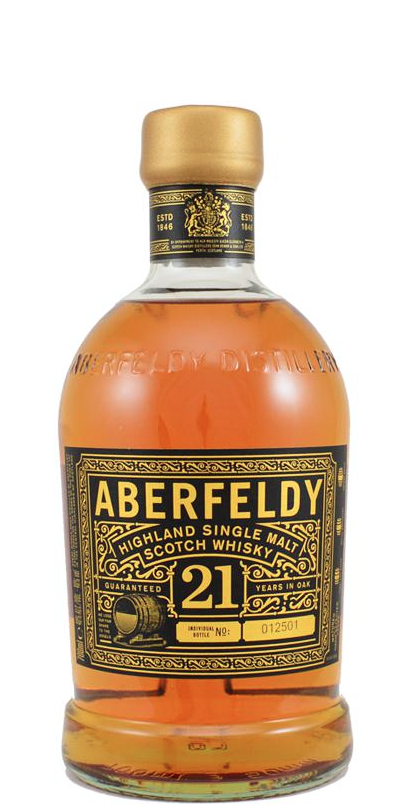 Aberfeldy is a distillery owned by Dewar’s (Bacardi group) and set in Central Highlands. Generally, it’s little-known, but this 21 yo was nominated best regional malt at the 2014 World Whiskies Awards. The core range has been recently updated (bottles and labels are definetely stylish) and some bottlings pop up at festivals and in shops. Nice news, but we still prefer to drink it… All that for announcing that today we taste the oldest core range expression.

N: it smells suddenly like a “classic”, in the best sense of the word. It’s very deep, mature and open, without any alcoholic harshness (obvious: it’s 40% ABV). There’s a “breakfast” sensation, played between croissant fresh from the owen, warm rusks, milk chocolate and vanilla… But it would be a mistake to think about a one-dimensional sweet whisky: the percentage of ex-sherry casks is necessarily high, because vivid notes of red fruits (cherries and raspberries) and sweet pipe tobacco are clearly detecteable. A lot of sultanas, too, with dried plums and toasted nuts (peanuts, to be precise). A faint minty hint closes the circle of a round, pleasant and… classic nose.

P: several whisky passionates openly criticize on the website the decision to bottle at 40%. We generally agree and we’d always prefer a higher strength, but in this case we don’t find this malt flat or weak at all. The body is not the most explosive we’ve ever tasted, but it’s definetely decent. The first sip gently welcomes us with a clear waxy note: beeswax, with some not-so-sweet honey. Indeed, it’s delicately bitter, with a propolis suggestion. In the background are still here chocolate, toasted nuts and a veil of sultanas and red fruit far less evident comparing to the nose. What a nice surprise! The complexity is unexpected and it doesn’t fail to be easy to drink. Towards the end it actually shows a smoked nuance…

F: the low ABV is responsible for a rather short finish, focused on honey, raisins and a delicate smokiness.

We don’t know why, but we expected little by this dram. And now we’re glad we’ve been disproved by the facts. It’s a nice whisky, pleasant, quite complex, with those waxy and Highlander notes that drive us crazy. The low ABV is generally a limit, but in this case it makes the dram dangerously drinkable. Our judgment is 87/100, considering also the price: 90 euro for a 21 yo it’s quite rare.

Recommended soundtrack: Aberfeldy – Whatever turns you on.