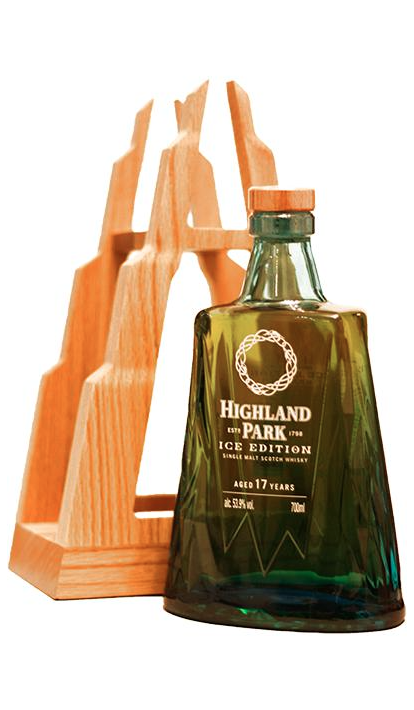 The protagonist of monday’s tasting was obviously this Highland Park ‘Ice Edition’, inspired by the role of the elements in nordic mythology – mythology that, you may have noticed, occupies the creativity of the marketing managers from Highland Park. There’s something legit in this operation: Orkneys are Viking lands, passed to Scotland thanks to an endowment in a marriage between a Danish princess and a Scot prince. Or to say it better, the good old Christian I of Denmark was a bit short of cash at the moment, and historicians report that he said: “Well, we have a couple of isles close to your lands, maybe it’s ok for you?”. Without getting into every detail of Nifelheim, Jotunn and other amenities (that we old metalheads kindly invite you to discover), let’s just say that the Ice image is well replied in a very nice bottle, that may be annoying for the purists but objectively has its own reasons of fascination. So, the whisky: 17 years old, ex-first fill bourbon casks, bottled at cask strength.

N: Martin, while presenting it, insisted on the ex-bourbon casks influence: and it’s true that the wood plays on the main stage here, with a ‘sweetness’ made of vanilla, marshmallows, Torta Paradiso (icing sugar and a slight lemony feeling). Coconut, and this hint brings us to a second, impressive side: it’s actually very tropical, with mango, star fruit and coconut. Definetely lighter, we have mineral notes, halfway between wax and some greenish notes, herbal (leaves, fresh flowers).

P: coherent and powerful, it hits the palate with a huge intensity, and traps it with a lot of suggestions, fully packed and compact. There’s a sense of sweet acidity that makes us think to tropical fruits: not so ripe ananas, then coconut and ripe banana. Vanilla of course. Then we find slight mineral notes, some peat, some waxiness, some clear spices (candied ginger, we’d say).

When we tried it at the tasting we found it was a bit too cask-driven, but tasting it at home, more focused, revealed a better experience: of course casks are kings here, but the Highland Park spirit manages to shine with its peculiar heathery and lightly peated notes. Much more tropical than expected, we actually really liked it: we’ll keep silent on the price tag (which is a bit high, if you think it’s a limited edition of ‘only’ 30k bottles), our vote will be 86/100.