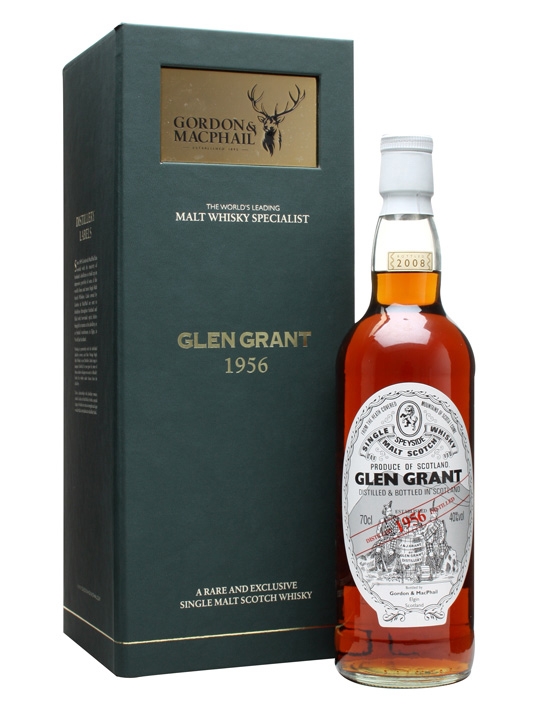 In 1956 the sovietic tanks entered Hungary, stopping the insurrection against the communist regime; in 1956 Elvis Presley entered for the first time in the USA chart, shocking the puritan America with his pelvic moves; in 1956 Nasser nationalised the Suez channel, opening an international crisis; in 1956 the death penalty was abolished in England; in 1956 in Rothes, Speyside, in the Glen Grant distillery two ex-sherry casks were filled. First fill casks, just arrived to Scotland. Those casks have been maturing for 52 years in the warehouse until 2008, when the independent bottler Gordon & MacPhail decided to awaken the spirit. We were lucky enough to receive a sample of this Glen Grant from the “Rare Vintage” serie. G&M is licensed to bottle casks from different distilleries with a particular label, a real partnership between bottler and producer: these bottlings could be considered almost “official”, and they made the Scotch history. This kind of label is still used by G&M, to witness the trust between the brand and the whisky industry. Let’s taste it.

N: hold on! “Call the anti-maltporn brigade”, Serge would say. Flavours unfold with an impressive intensity we experimented very rarely. On the fruity side, we find that cheeky and fresh liveliness we fell in love with when we tried the Bowmore Bicentenary: red and dark fruits (wild berries juice and chocolate), cherry gelée, red grape. Fresh figues and something almost tropical. To broaden the already huge palette of sensations, here they come chinotto, tamarind and sultanas: a cigar box (no, maybe pipe’s tobacco), leather, old paper and the grandma’s furniture. Enchanting grassy and minty notes. Is there any celery? Well, there is even celery, yes.

P: great body without any alcohol aggressiveness: it’s a nectar more than a spirit! Of course in the palate you can taste the time: half a century spent in the cask is not so easy to hide. So the juicy red/dark fruit is here less powerful; it’s still present on the rich menu with cherries, grapes and raspberries. But the main course is the oak, with generous and astringent tannins, never excessive. Pipe’s tobacco, mint leaves, maple syrup, licorice sticks and rhubarb come to mind. Dark chocolate. The balance is unstable but majestic: it would take very little to destroy this incredible masterpiece, it’s simply magic.

The casks – indifferent to the time – spent more than 50 years sleeping and in the glass the gravity of this indifference is clear. The nose is spectacular, the sherry freshness is impressive. It reveals a quite unique complexity, at least for us, unaccustomed to this long ageing. The palate is a little backword, with the oak taking the scene, without being unpleasant. It shows unexpected quality and fullness: the power of a nectar bottled at just 40% ABV is dazzling. We literally loved this malt: 93/100.