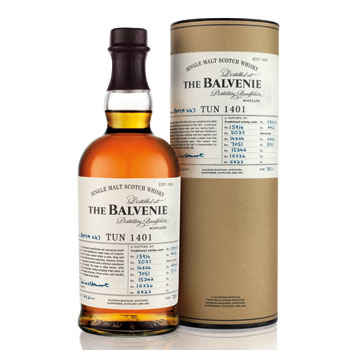 The day after the Milan Whisky Festival, we need to clean up the mess and to pick up the pieces, the faces and the stories. And of course the samples, too. Now we restart from last year edition of the Festival, when we managed to take a rare Balvenie release, the 7th batch of the “Tun 1401” serie, named after the number of the tuns used for the marriage. These releases, characterised by a super careful choice of the casks (whose numbers are always mentioned on the label), seem to stop in 2013, with the 9th batch. And they gave way to the “Tun 1509” and “Tun 1858” series. Specifically, this whisky was obtained blending together seven American oak casks and two sherry butts. Slainte!

N: warning! Red alert! Insane nose! Top of the class for intensity, pleasantness and consistency. Despite the blending proportions, we smell an old and silky sherried profile. At the same time, it’s lively and fresh, too. In fact, suddenly a waxy shield is recognizable (beewax and extinguished candle). Something that we use to find in the greatest whiskies. Anyway, under that all hell breaks loose: tea, rhubarb, wet cellar, moist oak from the cask. No traces of vanilla but an extremely vivid fruity side, dominated by an overflowing strawberry and by extra-juicy peaches. The honey is the bonding agent between dried plums and sultanas, chinotto and sweet orange. Terrific nose.

P: incredible the absence of the alcohol, that makes everything more juicy… It’s a real nectar, even if the fruit (strawberries again) is less pronounced than in the nose. A nuanced – but intense – woody character prevails: moist oak, tea leves, tobacco, eucalyptus, rhubarb, cloves, coffee with milk and beewax. Citrus fruits and caramel join the party. An anthology of gentle and mixed notes in a potion of great intensity.

The “Tun 1401” series is nowadays for collectors and it will be difficult to review any further batch here in addition to this one and the batch #2. The 7th release is more or less 500 euro, just saying that… Anyway, we’re talking about the best casks of one of the best Scotch distilleries. Not chicken feed: 92/100.

Recommended soundtrack: Queen – Somebody to love