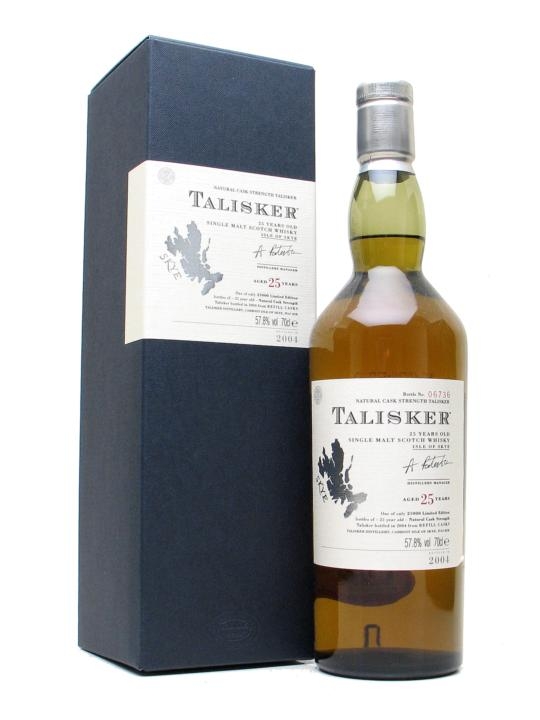 Since 2001, Talisker has been including in its core range a 25 yo bottling, in a limited and numbered edition. We got hold of a 2004 bottling, now far away in time and hard to find, but – to tell the truth – not so rare compared to other vintages: actually 21.000 bottles released. It’s a vat of refill sherry casks and we look forward to taste it.

N. no preamble, zero frills: it’s a Talisker made not only by the sea, but also by the solid rocks of Skye. After a quarter century it’s still sharp, with a vegetal and aggressive peat, a mix between sea breeze and acrid tar. And black pepper, too. In short, a Talisker wearing its best suit. Ah, we forgot to point out the magical disappearing of any trace of alcohol. With time, surprisingly, a deep and multiforme sweet side opens up: marzipan, red fruits and mainly liquorice. It’s evolving all time, it’s difficult but challenging. It takes a very few drops of water to make it more easy going, sugar and vanilla.

P: what an explosion! Oak and liquorice act as universal glue for a mouthfeel that wonderfully preserves the nose dichotomy. Black pepper and yellow fruits make love, not war. And also citrus (much pronounced now) and seaworthiness belong together. Later there’s an acrid peat, smoky, vegetal and really exceptional. Water makes it farmy, with impressive waxy notes and with a swetness even more exciting.

Time ago we reviewed the 2008 edition of the 25 yo, delicious and complex. This elder brother is equally multi-faceted, despite different organoleptic impressions. But it seems better in terms of intensity and overall quality of flavours: a true ode to the fullness, an overwhelming experience. This is simply the best Talisker we’ve ever tasted, so we pay homage with a satisfied 93/100.