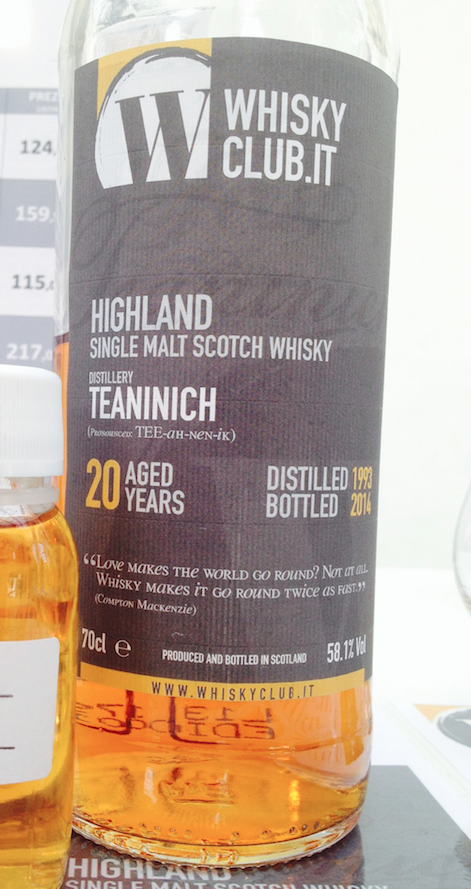 Today we’re tasting another bottling of the newborn Whiskyclub.it: it is a cask-strength Teaninich in sherry cask, aged for twenty years, between 1993 and 2014. The cask was purchased by Hunter Laing (company of one of the two sons of Douglas Laing, Stewart), who doesn’t only work as an
independent bottler but also as a borker, and sells barrels to privates and selectors. This bottle will be opened with some cheeses tomorrow evening, at the first official club event… We’ll be there,what about you?

N: first of all, we’re surprised by the style: it’s a complex whisky, which deserves a slow meditation.First, let’s take into account a marked minerality, earthy, perhaps we seem to feel a slight
peatiness. Intense citrus notes: orange peel, perhaps even oranges way too ripe, almost rotten… Almost farmy notes, too. There’s also a lot of ‘sweetness’, between cola, strawberry jam, tarte tatin. A bit of wood, and pleasure is here in front of us. The farmy, rural side and the woody part, made of toasted, caramelized sweetness, are constantly growing. Caramelized peanuts? With water, the experience rears up: it rounds off, opening to intense dried fruit, pipe tobacco (intermediate ones, not too sweet), but also to a metallic, rusty minerality. An amazing nose.

P: consistent with the nose, in the sense that it is very particular on the palate too, and can be faced from multiple perspectives. Still mineral and intensely farmy, then tough citrus shots and ‘scorched’ red jams, toasted wood, apple chips. Splendid. With water, it gets even better… Intense honey, caramel, a hint of nutmeg… And again, sweetened hot tea, pipe tobacco, red fruit.

What a surprise! We tasted this sample because in Rome Davide told us that he liked it very much; but you know, we don’t trust that chap, we wanted to get our noses on it. Well, what can we say, it’s really extraordinary: what is so impressive is the coexistence of a truly massive intensity with a complexity of aromas and flavors, in constant evolution. If you taste it, give it time, play it for a long time: it won’t disappoint you! 93/100 is our vote, which leads us to a consideration: this bottle in Rome costed 115 euros… We haven’t tasted the official Port Ellen of last year yet – but can the quality justify such an abysmal price difference? Bah. If in doubt, we would know what to choose. Congratulations more than sincere to Claudio and Davide: fantastic bottle.