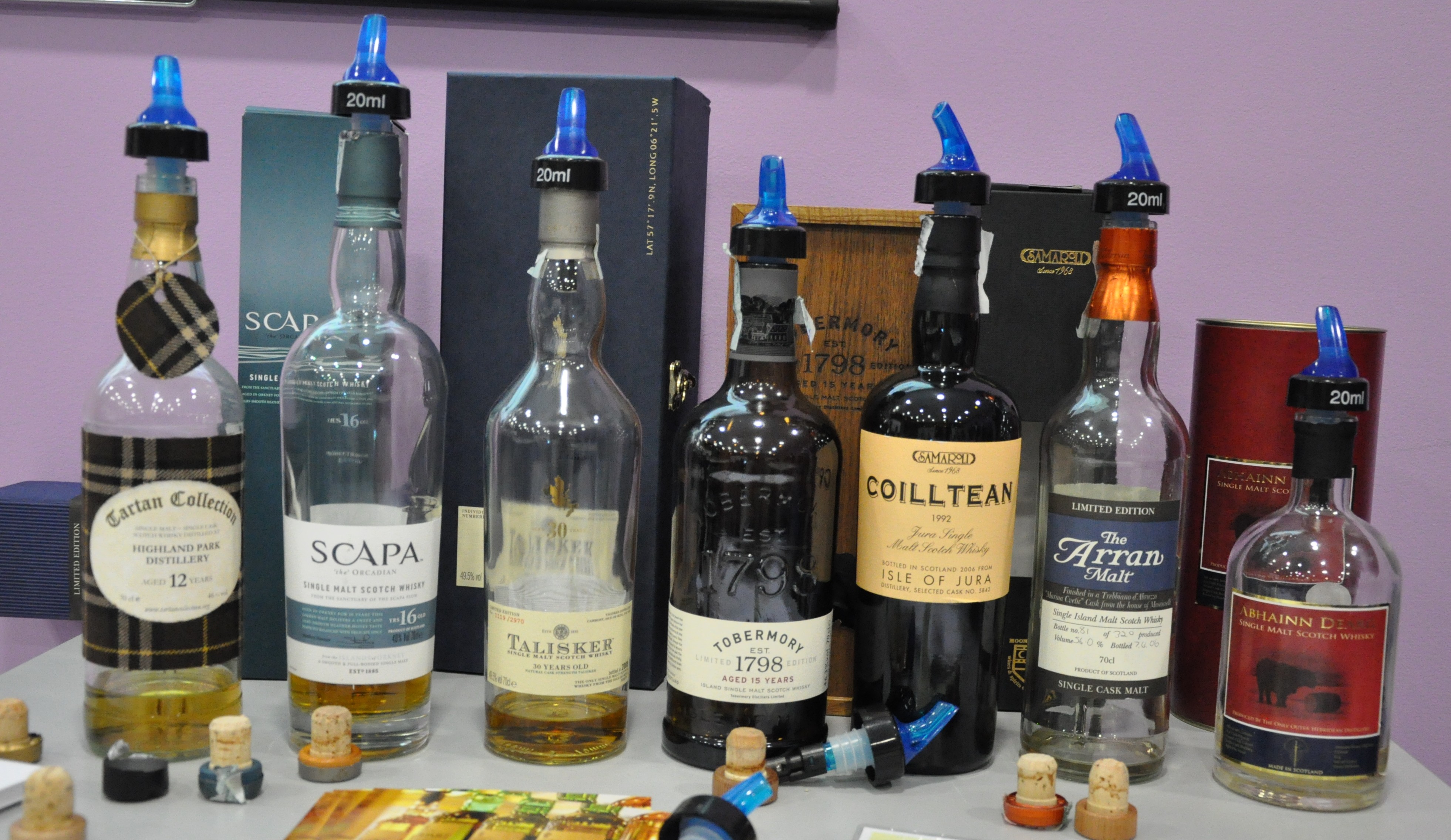 On Saturday evening one of us had the pleasure of attending the first national convention of the singlemaltwhisky.it in Ospitaletto (Brescia). The forum, populated by an increasing number of whisky lovers, is a real reference point in Italy for those who want to share their infatuation with our dear distillate. In this regard, without exaggerating in rhetoric, we would like to thank Gian Paolo and Dameris, splendid hosts; then of course Claudio from I Love Laphroaig and Davide from Angelshare, masters of ceremony who were able to entertain the participants, overwhelming them with an extraordinary passion, authentic and involving. Congratulations, you were great!
Before moving on to what we drank, a quick consideration: it’s really nice to always find people who are so friendly, maybe it’s due to the object of our common passion: whisky make us all “light weight”.

The topic of the evening was “the Islands of Scotland”, excluding Islay, for once; so we tasted seven whiskies, one for each distillery located on the various islands of Scotland. In order, from the Orkney Islands, a Highland Park 12 yo Tartan Collection, selected by Claudio Riva, and an official Scapa 16 yo; from the island of Skye, a Talisker 30 yo, official bottling of 2008; from the island of Mull, a Tobermory 15 yo, finished in Oloroso casks; from the island in front of Islay an Isle of Jura 1992/2006 selected and bottled by Samaroli; from Arran, an official 2006 Isle of Arran bottling finished in a barrel of Trebbiano d’Abruzzo; finally, a real gem: the very first single malt bottling from the newborn Abhainn Dearg distillery on the island of Lewis, Outer Hebrides. Of course such a funny meeting is not the best situation to analyse and dissect a whisky, but despite this we decided to publish, below, some short tasting notes of the bottles we drank, written thanks everyone’s suggestions. If our opinions and judgements (votes included) are always to be taken with a grain of salt, in this case the warning is doubly valid; but since this blog is mainly a diary of our tastings and experiences, well, we certainly couldn’t avoid it. Arran and Abhainn Dearg are the malts with the poorest notes, but they were also the last two… The concentration was physiologically diminished, but we hope the reader will forgive; after all, it’s a game, isn’t it?

N: very perfumed, floral; there are intense notes typical from ex Bourbon barrels (vanilla, yellow fruit); the brackish is remarkable. There are spicy notes, and after a while a delicious woody aroma tends to come out. P: walnut? Very cereal-like. Consistent with the nose, it is a ‘delicate’ whisky but the flavours are nicely evident, they show that intensity missing in the official 12 years old. F: not very long, but all on cereals and a light peat. Overall, an excellent whisky, definitely better than its official counterpart. 85/100

N: compared to HP, it has less vanilla but the cereal is more impressive; it is a bit more ‘vegetable’ (notes of aniseed, but above all hay and barley) and more fruity (always yellow fruit, even if at a certain point we felt like smelling strawberries…) P: again, between cereal and a very intense and tasty yellow fruit (peach, above all!, really sharp; also apricot and tropical fruit). F: not very long, on liquorice and malt. Overall, not bad; you can feel the contribution of first-fill barrels, as Claudio rightly noted. Simpler than HP (it lacks marinity) but with an exquisite fruit on the palate. Same rate: 85/100

The deficiency of these notes stands out painfully for the Talisker: great complexity, it hasn’t stopped changing during our three hours meeting. We hope to have a chance to drink it again in the future, spending more time ‘studying’ it… It’s worth it! N: spectacular, there are sweet spices (cinnamon and nutmeg), there is caramel, there is honey, but what strikes us most at first is the intensity of the wax and some ‘barn’ notes (wood, dust, hay… barn, right?) that until now we had only found in Brora. There is everything and more, vanilla, spices, intense fruit (dried fruit, sultanas…), liquorice, citrus. All surrounded by a very gentle smoke (charcoal, extinguished bonfire). P: flames of flavour. Liquorice, orange jam; spices (ginger, black pepper), more wax; natural caramel, dried fruit; salty in the end. Simply excellent. F: long, persistent, in continuous evolution; marine notes prevail, we would say. The winner of the evening: 91/100, but only because we could not drink it with sufficient attention, otherwise  the vote would have been higher…

N: the finish of a few months in sherry casks can be recognized immediately; unfortunately, very intense pungent notes prevail (someone said acetone, someone wood wax… we smelled something similar to balsamic vinegar), leaving in the background some pleasant fruity aromas (dried fruit, again) and a light milk chocolate. P: practically without body… sweetish, even if not completely bad; bitter red fruit (Davide rightly mentioned cherry stone), caramel, sultanas… A little licorice, perhaps. F: on dried fruit, but it doesn’t seem particularly persistent. A malt that is not completely messed up but certainly easy to forget. The wooden spoon of the evening: 80/100

The ‘strangest’ dram of the evening, with a very light straw colour. N: almond, grape? what dominates, however, is the vegetable side, grassy (lots and lots of hay); the alcohol can be felt, perhaps a little too much; a very light vanilla in the background. P: again, very herbaceous; almond, walnut… the initial sweetness soon turns bitter, with all the attention concentrated on the hay and a light cereal. Licorice? F: not very long (but certainly its ‘lightness’ was penalised by coming immediately after the Tobermory, sherried and definitely on more intense flavours), still the grassy side and the almond prevails. All in all, it is a particular malt, which certainly won’t be loved by everyone; such a grassy profile we personally like a lot, but maybe this Jura is a bit penalized by not having much else to offer. We’d be happy to drink it alone, with more calm. For now, we’d hate to give it less than 84/100.

The real surprise of the tasting. At this point of the evening our desire to take notes was definitely submerged by the 5 malts already tasted, so the notes will be even tighter. N: you can smell the ABV, you need some water. Vanilla and yellow fruit stand out, very intense; slowly a very good warm wood seems to come out, perhaps slightly spicy. P: in our notes we wrote “very fruity and woody”… You can clearly feel, with an intensity that really struck us, a little vanilla and above all a lot of yellow fruit (fresh apricots, peaches in syrup…). Very fruity, very good. F: more fruit, more wood here and there. Definitely better than the notes we dedicated to it: 88/100, and we hope to taste it again in the future.

We didn’t write down any tasting notes; on the other hand, this is little more than a new make, with a very particular profile and still very little defined. We spend two lines just to present the micro-distillery, built on the island of Lewis in 2008 to try to give visibility to the local community and to reconstitute the glorious tradition of illegal distillation. To give an example, the stills are the ‘enlarged’ version of those – extremely crude – owned by the owner’s grandfather Mark “Marko” Tayburn; again, to give the idea, part of the barley (but the project is that it becomes the totality) is grown directly in the fields adjacent to the distillery. More accurate words are however spent by Claudio on his website: here you can find the report of his visit to Lewis Island, with beautiful photos and a lot of precious information. No vote, then, but maximum support for Marko’s project!